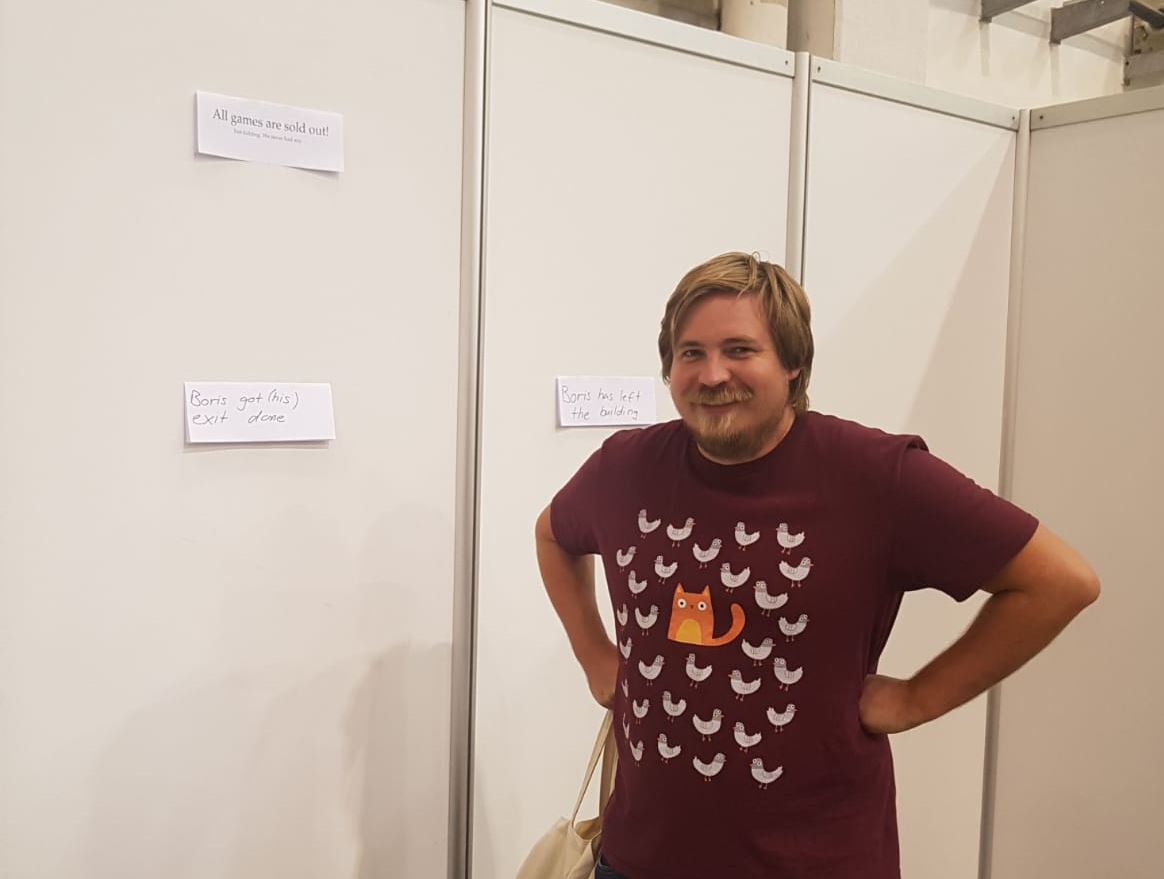 On the Wagon Again is a regular series of articles in which you can get to know regular members of the Wageningen Board Gamers, past and present. This time we introduce our Website Manager: Boris!

I’m Boris Kooij, 29 years old, born in Delft, grown up in Rijswijk, studied in Wageningen, and I am currently living in Rhenen. Below you will find some information about 5 games I really enjoy. They are for sure not the five best games I ever played, but I just have really fond memories of these games.

Perudo is the game I probably played most in the past 20+ years. It is a light dice rolling  and bluffing game. Everybody starts with a cup and 5 dice. Each round everybody rolls their dice in secret, and successively everyone has to declare a higher bid about all dice on the table (for example; “I think there are nine fives”). If you do not believe the bid of your predecessor, you can call Perudo and check if the bid indeed was too high. If you were correct your predecessor loses a die and starts a new round, but if you were incorrect you lose a die and start the next round! You win the game by being the last player with dice.

It is a really simple game, but I have so many amazing memories of impossible rounds of (rolling nineteen fives with twenty dice!) this game had to be on the list!

I started playing board games when I was really young, my oldest memories about board/card games are about playing games with my grandmother. At home we did not have/play a lot of games till around 1999 when Catan was released by 999 games, but at my grandparents house we played a lot of games before that time. Wildlife is probably the game which got me playing games. It is a roll and move game in which you have to collect animals all over the world to create the best zoo in the world. During high school I almost did not play games (only MtG), but luckily I re-found my love for games during my studytime in Wageningen.

One of my other hobbies next to boardgaming is growing chillies (you will find out more later in this article 😉 ), and because of this I had to have this game when I saw it on Kickstarter back in 2014. It was the first game I backed on Kickstarter and since then many more have followed, including the expansion for Scoville.

Scoville is a medium weight euro game about growing, cross breeding and harvesting chillies. Every round consists of several phases; bidding for round order, planting new chillies, harvesting chillies and selling them on the market. The most unique part of the game is the harvesting/cross breeding of chillies. On your turn you move your worker three steps on the board, and you harvest a chilli depending on the chillies you walk through (when you for example walk between a red and a blue chilli you may harvest a purple chilli).

Scoville is for sure not the best euro game, and it does not play well with an uneven amount of players, but I still really like the game and can’t wait to play it again.

There are several reasons why I like to play board games, but the most important is having “fun” together with other people. It is difficult to explain why games are “fun” exactly, since this all depends on the type of game and the players you play them with. A lot of party games are fun because you can have a good laugh, but heavy games can also be fun according to me.

My number three board game currently is Viticulture (Essential Edition, or plus the Tuscany expansion). Viticulture is a worker placement game about making and selling wine. You as a player inherited some vineyards at the beginning of the game, and by planting vines on these fields you are able to grow grapes of different qualities. Subsequently you will harvest these grapes, and make wine out of them so you can sell your wines and score points!

Viticulture is a straightforward worker placement game. Every round you have workers which you can use to do actions, but the twist viticulture gives to this genre is “seasons”. You place your workers during 2 (with the expansion 4) different seasons, and workers you play during the first season you can’t use in the following seasons. Because of this you have to keep track of how many/what kind of actions all opponents do, otherwise you probably can’t do all the things you would like to since action spaces are limited.

Although the game is playable with 1-6 players I prefer it with 2 or 4 players, playing with an even number of players the game has less action spaces per player, which makes the game more fun in my opinion.

Next to board games, my other hobbies are cooking and growing chillies. I always enjoyed cooking a lot, and since I moved into my own place and had to cook for myself I started to love it more and more. My favourite cuisine to eat and cook is Indonesian (that is probably also why I love to go there). My other hobby, growing chillies, is of course connected to cooking. Because of my love for spicy/Indonesian food, I started to grow chillies myself several years ago. I started with growing regular cayenne chillies (“spaanse pepers”), but soon found out about the thousands of different chilli varieties there are. Every year I started growing more varieties, and last year I had around thirty plants of over ten different varieties (Bhut Jolokia, Lemon Drop, Brazilian Pumpkin, Bishops Crown, Tabasco Short Yellow, Tepin, Chicken Heart, Beni Market, etc..).

I kickstarted the second printing of Gloomhaven in 2017 after the amazing reviews the first edition got. Gloomhaven is not the type of game I would normally play or be interested in, but I am really happy I decided to back the game in 2017!

Gloomhaven is a massive cooperative storytelling/role playing/dungeon crawling/campaign game with a “euro” twist. In Gloomhaven players will take the role of a character who all have different strengths and weaknesses, and together you will try to clear dungeons and fight bosses. During each scenario players are able to collect money to improve their character and experience to level up. Every character starts the game with a small deck of cards, which determine the actions you can do. By leveling up you are able to add more advanced cards to your deck to do more powerful actions. The biggest difference with other similar type of games is that there is almost no luck in this game, and strategy is really important.

I played this game over 40 times already, and I still love playing the game every time. The only disadvantage of the game is, you won’t have enough time for other games anymore…

There is not one answer to this question. As I said before according to me board games are “fun” depending on the genre and the people you play them with. Playing Dixit with my family can give me a lot of satisfaction, but I can also have a really good time playing Patchwork with my girlfriend or Mage Knight with some friends. But in general I tend to like medium/heavy games best, although I think I enjoy playing a variety of different types of games even more!.

According to me Concordia is the best medium/heavy euro game currently on the market. In Concordia every player starts the game with the same seven cards, and on your turn you play one of these cards. These cards depict the actions you can do on your turn, and using these actions you will try to build settlements all over Italy/Europe (depending on the map) and produce goods to score the most points and win the game. Despite the two page rulebook, and limited amount of actions you can take each turn, Concordia is a wonderfully deep game I could play every day of the week!

Wood for sure, wooden pieces are just the nicest to play with! But I of course would also be happy with cards and dice. Hope to meet you all during the Wageningen Board Game Getaway and play one of these games (or any other game)!