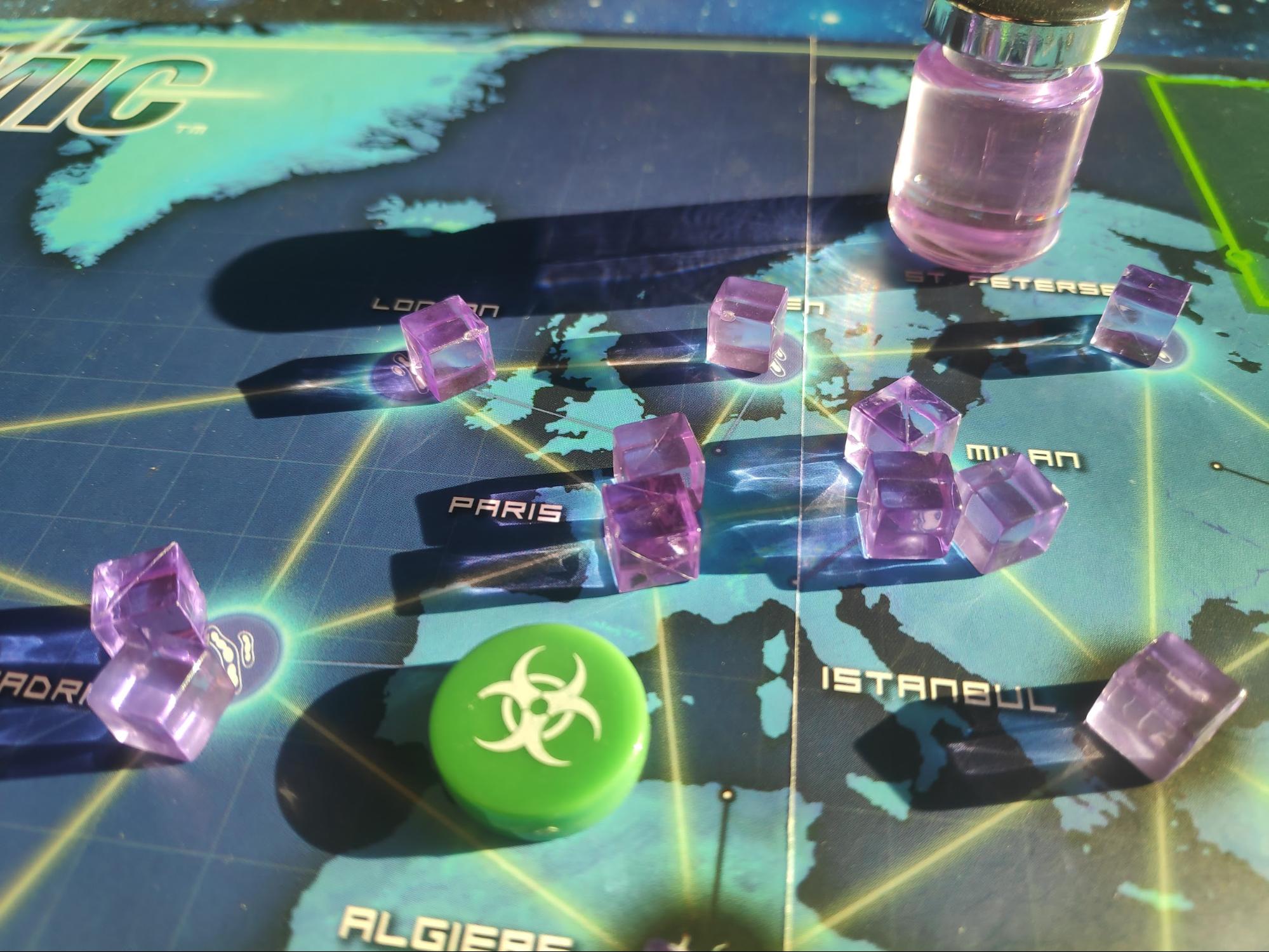 It is a dark time for board gaming. With isolation measures now quite firmly in place in The Netherlands, any group gatherings of 3 or more are banned, everyone should stay at least 1.5m apart, and you should stay home as much as possible. If people follow these behaviours, hopefully we can handle this Covid-19 threat. But that means regular meetups, in large groups or small, are no longer possible. And that means no… more… board games!!! (breaks into tears)

But have no fear! Turns out there are plenty of options for entertaining yourself while you’re staying at home. Whether you’re alone, with someone else, or living with more than 2, we’ve found some options to keep playing while staying safe!

The first thing to check out are all the publisher giveaways. Game publishers are well aware that people are clamouring for boredom busters, and now that most games stores are closed (for public viewing), many have offered freebie expansions and print’n’plays. Of particular note is the modern take on Love Letter, or the Family Edition of Cards Against Humanity.

Tabletop Simulator and other Apps

There have been several options available for people unable to physically meet in the form of online board game simulators such as Tabletop Simulator, Tabletopia, Board Game Arena, or other app implementations of board games. Since the isolation started, I’ve already used this several times to play a variety of games. Tabletop Simulator in particular has a dizzying number of games available (and many are freely available, which feels wrong, but paid DLC versions are also available). There are very few games in my library that have not already been added to this tool.

Tabletop Simulator (and Tabletopia) are generally physics-based simulators (all pieces are modelled) with little automation – you still need to move the pieces. But other options such as Board Game Arena automate parts of the game. This is a godsend when playing particularly fiddly games like Through the Ages. Speaking of Through the Ages though, there is an official app for this and many, many other games that do a great job of providing a isolation-compatible way of playing board games! Personally, I particularly recommend the Through the Ages and Galaxy Trucker apps from Czech Games Edition.

If you’re locked in with a spouse, flatmate, or family member, now’s a great time to play through a legacy-style board game such as Pandemic Legacy, Charterstone, or even massive campaign games like Gloomhaven or Star Wars: Imperial Assault. If you’ve not tried a Legacy game, the crux is this: every game you play will have direct effects on the state of the game for future plays in the form of stickers applied to the board or cards, introduction of new elements in the game, and (gasp!) permanently destroying components.

Both Legacy and campaign-style games often have an overarching storyline to follow as well. While the writing is not stellar, award-winning prose, it doesn’t need to be, because you are typically able to bond with the characters you play with, and you experience their successes and failures.

But what if I’m isolating all alone? It’s just me in this cramped construction of concrete, timber, and steel. Or, the people I’m with don’t want to touch a game, no matter how much I beg?

Fear not! Many modern board games incorporate solo modes that are not just a way to play a game alone, but are also typically satisfying puzzles to solve. Some are even designed solely for solo play (for example, Deep Space D-6 is a game you can print-and-play that only requires some dice)! What’s the point of playing solo though? For me, a well-designed solo game acts as a puzzle I can solve (particularly if the game is cooperative, so you can lose to the game). Some games also come with an Automa – a simple AI to act as a reasonably realistic opponent. And many games have fan-made solo modes in the forums.This article is just one of many that explains some of the best solo games. Personally, I love Mage Knight as a solo game – the decisions in the game can be so brain-burning that playing with others would only slow the game down.

But if you crave that social interaction that normally comes with party games like Werewolf, Codenames, or Pictionary, look no further than the Jackbox Party Pack series of games. These are bundles of games that are designed to be played remotely, including games like:

The only requirements are that you have a device capable of navigating to jackbox.tv, and that you can watch the main screen via a streaming platform. In fact, every Sunday night from 19:00, the Wageningen Board Gamers are running an open stream for anyone join over on the Discord.

And if you want to host your own, Drawful 2 is available for free for another week or so, so grab it now!

What about non-boardgaming options? Did you know about the Wageningen Roleplaying Gamers? Also co-hosted by me (Sam), it is (was) a monthly meeting where you could come in and try out playing a Roleplaying Game (RPG), such as Dungeons and Dragons, or numerous other systems.

But don’t let the lack of physical proximity dampen your curiosity! There are plenty of ways to play RPGs online. Roll20 is perhaps the most well-known option, providing a range of methods for organising an RPG. The aforementioned Tabletop Simulator also has some great options for RPGs, with a pseudo-physical method for rolling dice and moving miniature figures around.There are lots of resources for people starting RPGs. Dungeons and Dragons, Pathfinder, Blades in the Dark, and Fiasco are all great starting points. Just get some friends together, jump on a voice/video service, and figure it out together (or find a friend who knows how to play).

But I don’t wanna learn an RPG online! Talking in-character, behind a computer while worried about my connection, and worried about my friends getting distracted by Facebook is just too annoying!

Once again, there is a solution! But it’s probably the one most outside of your comfort zone: solo RPG. This is playing a roleplaying game without a GM, other players, or anyone else around. Similar to playing a solo board game, it requires you to act as an ‘AI’ of sorts, following given principles.

D100 Dungeon is a fairly easy to follow free solo print-’n’-play RPG where you play as a single heroic adventurer, delving into a randomly generated dungeon in pursuit of loot, enemies to slay, and fulfilling objectives. Every square room is drawn up by you, so feel free to exercise those drawing skills. A lot of the game is rolling on random tables, which means sometimes Lady Luck can deal you a bad hand. But it can be satisfying when your character emerges from the dungeon, bloody and bruised, and you have an illustrated dungeon map to look back on.

On the more narrative side of solo RPGs is the 100% free game Ironsworn. This system is much looser in terms of how it is played, and you will likely be playing a character that will interact with other non-player characters. The only thing keeping this from devolving into you talking to yourself are the Oracle tables, which inject creative prompts to help shape the world and the people in it. Oh, and the dice system is unforgiving – your character will go through hell. But it makes for an interesting story full of unexpected twists and turns as the dice and Oracles help steer your story.

Of course, there are plenty of other things you can do in these lonely times. But if you crave that tactile feeling of components, the social buzz of party games, or the strategic thrill of competing against others in a game without a computer making half the decisions, then I hope this article has provided some options for you. Stay healthy!