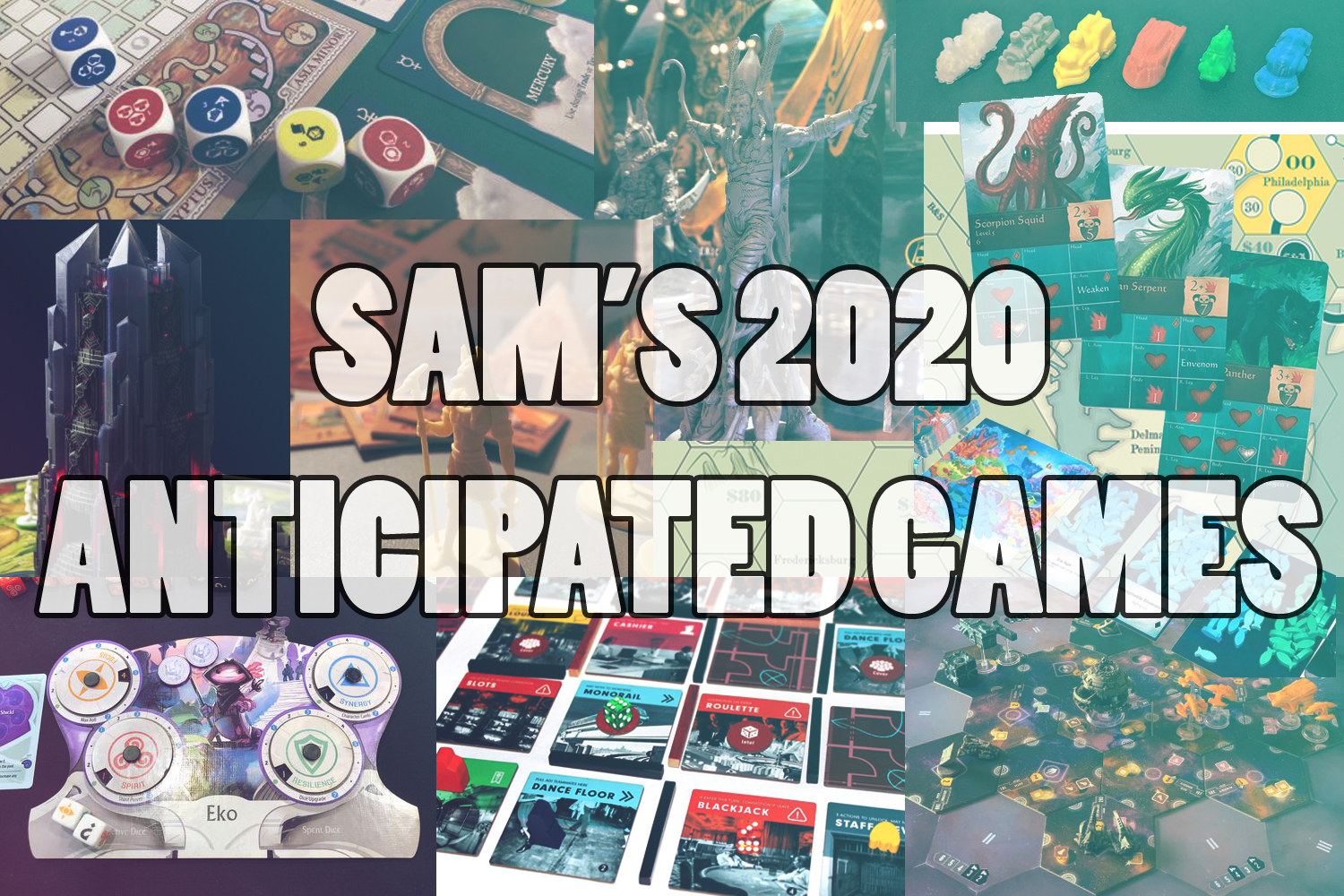 Sam Sarjant‘s tells about his 13 anticipated games to be released in 2020.

2020 is just starting, but already I’m looking forward to the games that are likely to come out this year. Some I have known about for a while, some I only just discovered while making this article, and some aren’t even properly confirmed for this year. But all have a potential for making a big splash in the board gaming scene this year.

Naturally, I cannot look at all the games coming out this year, and I have my own biases towards certain games. But hey, you’re already reading this, so I guess we should get started! Note that I used BoardGameGeek’s publication date for these games. Some may already be out (e.g. to Kickstarter backers). And for simplicity, I did not look at expansions.

Tidal Blades is a beautiful looking game that was on display at Essen Spiel ‘19. I didn’t get a chance to play it, but judging by the buzz it should make a splash. 1-4 players play a contestant competing in a tournament consisting of multiple challenges to overcome. The winner of the tournament is declared a Tidal Blade! The game itself looks to be a medium weight game that has a lot going on: dice, cards, worker placement, dials, etc. Whether or not it’s a solid game, it’s certainly pretty!

In keeping with the water theme, Oceans is certainly a 2020 release I cannot wait for! And thankfully it should be available early in the year. From the same creators as Evolution, Oceans is a sequel of sorts to Evolution, following a similar structure of create species to eat food (food=points), for 2-4 players. But it has several key changes that make the game much faster, much more ‘combo-riffic’, and much more varied between games. And, like Tidal Blades, Oceans is also just a beautifully game to look at, both box and components.

Coming from publisher Restoration Games, a publisher dedicated to revitalising classic games for the modern day, is the 1-4 player cooperative remake Return to Dark Tower. The original came out in 1981, and had that classic ‘big chunk of plastic with a computer inside’ from the era.
This remake retains that technological interface, but what is perhaps the most exciting thing about this game is that designer Isaac Childres (of Gloomhaven fame) is listed as the first designer! Say what you will, that man knows his stuff, so let’s see how this one shakes out.

The original Burgle Bros was themed around a tower heist, stealing goods from floor to floor. But now, Fowers Games has developed a sequel: Burgle Bros 2: The Casino Capers. As you may have guessed, this one is now about heisting a casino. The game looks similar to the original, which used a 4 actions per player model of searching tiles while guards continually patrol. But there are several twists that look to make for a tighter design and a greater climax to the game. Plus, THE BOX HAS LEGS to make a two-storey game board!

Sleeping Gods is the latest game from designer Ryan Laukat (Above and Below, Near and Far, Islebound). It follows a sprawling open-ended campaign model like that seen in recent releases like 7th Continent, where the players explore the world seeking out totems across the seas and islands. Like many Laukat designs, this game is likely to have a warm story filled adventure for 1-4 players.

Keeping with the theme of gods, but flipping the violence level completely, Ankh: Gods of Egypt is the latest game from Eric Lang and CMON. Bound to be packed with pretty minis, and lots of god-on-god violence, this game is the next in line after Blood Rage and Rising Sun. Promising non-random gameplay, this is one for 2-5 people who want to win through wits alone.

7. Cleopatra and the Society of Architects: Deluxe Edition

I had the chance to play the original edition of Cleopatra and the Society of Architects way back in NZ, and I remember it fondly. Designed by well-known designers Bruno Cathala and Ludovic Maublanc, the original had many interesting mechanisms coming together such as Tetris-style piece placement (à la Patchwork), set collection, half-blind market (market deck consists of face-down and face-up cards), the box as part of the board (the raised temple itself), and perhaps the biggest one: the player who has taken the most (secret) corruption is simply eliminated during final scoring! For 2-4 players, and due out soon, I look forward to playing this at the meetups.

Roll and Write style games have really taken off in the past year or so. Welcome To, That’s Pretty Clever, and Railroad Ink are all big names, but all generally quite light. Well, Rome & Roll aims to drop an anvil on this genre and show that Roll and Write games can be as heavy as other big games. For 1-4 players, this release features Dávid Turczi as a co-designer, who is a heavyweight expert.

If we’re talking about heavy, thinky games, we can’t miss the latest release in the 18XX series: 18Chesapeake. For the uninitiated, 18XX games are a series of games focused on building train routes and manipulating corporate stocks in a non-random environment set in the 1800’s. I guess they ran out of numbers, so are just using words after the ‘18’ now. If you want a taste of these 2-6 player games, check out our Discord for the regulars who frequently organise sessions there.

Train games don’t always need to be set in the real world though – what if you mix trains and magic? Publisher Level99 games are set to release Empyreal: Spells & Steam, a game of network building, delivery and markets for 2-6 players. Level99 are well known for their off-beat games, check out Millennium Blades for a very different kind of game, that often have very clever designs built in, so I look forward to seeing this one.

11. Eclipse: Second Dawn for the Galaxy

Eclipse was originally designed to take the sprawling event that is Twilight Imperium and condense it into 3-4 short(!) hours. And it does a damn good job of it, but not good enough! Eclipse: Second Dawn of the Galaxy polishes some of the rougher edges on the original edition, as well as improving the overall component quality of the game. If you’re after a solid 4X game with asymmetric starting races where only the best strategist comes out on top, grab this 2-6 player game when it releases.

Now we get to the subjective last part of the list that lacks much research. Vlaada Chvátil is my favourite designer, having released light games like Codenames and Pictomania, but also much heavier games like Galaxy Trucker, Dungeon Petz, Tash-Kalar, and Mage Knight. Whatever game it is, the theme usually oozes from every component and every word in the rulebook, so that’s why I’m anticipating whatever he next releases. Rumour is he’s working on something big, after releasing a few party games, and I cannot wait to see what it will be.

And the final item in the list is the confirmed-to-exist, but unconfirmed-release-date third part in the Pandemic Legacy series. Season 1 and Season 2 are both amazing games, yet also very different from one-another (yet still retaining their ‘Pandemic-ness’). So what will Season 3 (the supposed finale) bring? Will it continue to be a solid design? How will it fit into the Legacy storyline? Will it even release this year? Only time will tell…

And that’s it! Of course, there are plenty of already existing games that I’ve yet to play, and even more I’ve probably never even heard of. There’s even a GeekList on BGG for even more 2020 games. So, what games are you anticipating to play in 2020?