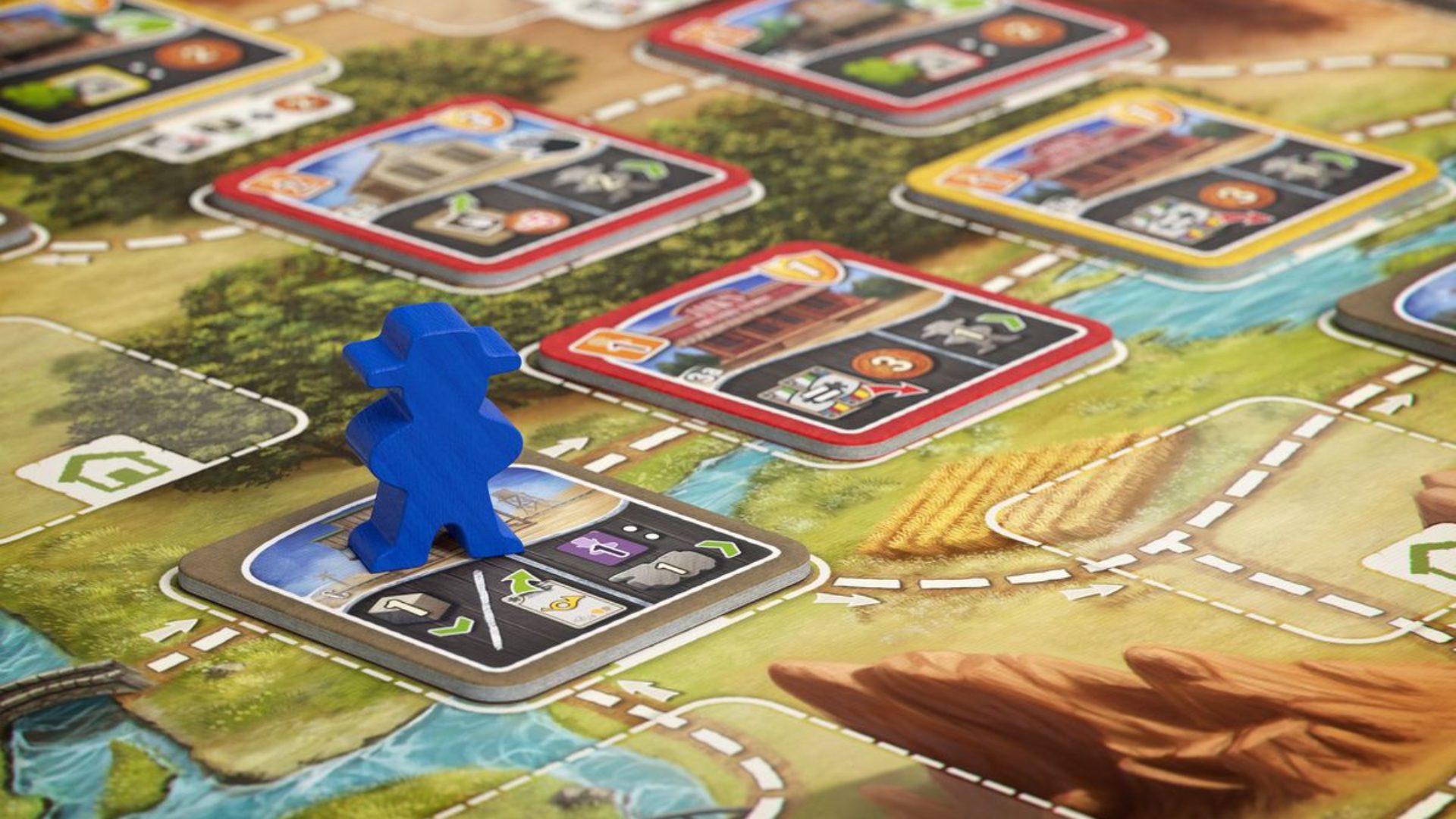 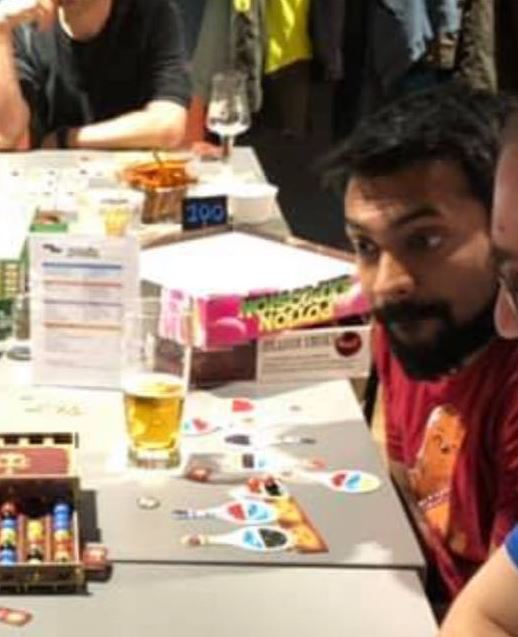 What is is like to go to Spiel for the first time? WBG friend and Amsterdicer Jeremy tells about his first Essen Experience.

For me, board games have always been a social endeavour. I started out playing as a way to hang out with my friends. I carried it on as a way to meet more people, always preferring games that are full of interactions, dialogues and (hopefully friendly) negotiating.

Living in New Zealand, the biggest convention that I had attended was about 150 people, where we got together and just played games for 2 days straight. When I heard about Essen, there was something about the size and scale of the event that my mind didn’t really comprehend. Two hundred THOUSAND people under one roof to mingle over board games seemed like the ultimate social board gaming experience.

I knew that my ideal Essen trip would need to be with a group of other fun social boardgamers, and as luck would have it, the group from Wageningen adopted me into their family trip. This took care of a lot of my logistics thankfully, as many accommodations in Essen get booked out almost as early as when the previous year’s Spiel event finishes! Most people end up living a town over, and taking the train in. While this usually opens up options, the main trade-off is having to fight for a spot on the metro at the central station, which is the intersection of all the lines. Our accommodation was very conveniently at the end of the line that went directly to the convention, so it was almost empty when we got in. However, soon it started to fill with all sorts of people carrying different sizes of bags, carriers and trolleys. All of them ready to be fill them to the brim with new games, known games, bargain games and probably many more impulsively purchased games.

Erik, who was the main organising force for the group, was considerate enough to send out newsletters and updates leading up to the event, with tips and hints to get people ready and hyped. Reading these filled me with both calm and turbulence. I felt like I knew more, but also felt like I now expected to be more organised (which I definitely was not).

My first day at Spiel

In a way, preparing for Essen is similar to learning to play a board game. You can watch the how-to videos, read the rules, get familiar with the strategy and work on optimising your action economy to get the most amount of points (enjoyment). Or you can just glance at the box art and jump into a game with other players and enjoy the experience, maybe intending to do better next time.

I definitely took the second approach, and I’m definitely glad for that. The feeling of overwhelm starts as soon as you approach the building, alongside thousands of others, eventually filling up one of the many lobbies waiting for the doors to open. As soon as they do, the crowds begin to spill in, and you can see people make beelines for their most anticipated booths, ready to learn, play or purchase the latest and most hyped games. The majority of the crowd milled about with polite curiosity, checking out the different booths, either recognising something familiar, or being gradually drawn in by something shiny and intriguing. I didn’t quite have an agenda for day one, so I was content to walk about and take in as much as I could. I played a few games that looked interesting, but mostly spent my time talking to various people about what their games were about, and what was special about them.

Essen is very much a trade-show and is a first hand view into how innovative the hobby has become. Similar to most other entertainment branches, you have the big, well-known publishers with large booths and a larger marketing budget. A few were focusing on advertising their latest game with top notch production value, a reasonable price tag and varying amounts of fun potential. Maybe the most bizarre bit of promo I saw was for a real-time co-operative medical game called Rush M.D. Here a costumed surgeon was operating on a dummy patient in the middle of the booth while people demoed the game around her.

Most of the bigger publishers had little stores, and areas to play their older as well as most recent releases. A lot of their games are reliable purchases, where you know at least you’re getting your money’s worth. What’s good here is that you’ll never really have a fear of missing out on some cool games, because you can trust them to be in stock at your local game store, or available online.

Where it gets a bit more interesting, and where I hope to spend a bit more time next event, are the games which are hyped up not because of publishing and marketing hype, or shiny new components, but because of their depth and potential innovation. These games are usually attached to a designer who previously had one or more hits and with this has created a loyal fanbase. These games are unfortunately the quickest to sell out, and so I missed out on all of my (eventually created) list that fit this label.

Here’s where being friends with other enthusiasts comes in. Having friends who enjoy playing board games as much as you do, you’re bound to find someone organised enough and with interests similar enough to you, that you will eventually get a chance to play that game you really wanted to. I feel like these games represent the true spirit of Essen. They’re your regular local restaurant showcasing a new menu, your favourite indie artist releasing a new album, or the director of that one random film that you really liked putting out something new.  My advice to other future attendees, as well as my future self, is to research at least this category because you’ll never know how limited a release might be, or how randomly innovative these end up being.

The last, and generally broadest category is all the ‘other’ games on show. Most of the games here are by small or independent publishers from different parts of the world. These games vary greatly in all aspects, such as price, quality, fun and innovation. Price tends to vary in line with quality (cheap games that feel like it, and high quality games that cost way more due to smaller production runs or more manual design), and so you have to be willing to accept less or pay more.

This category of unique games is also great for taking a chance on small and medium sized games with a theme or mechanic that you think you might like. There were games around animal based democracy, Tokyo city building, not dropping the soap in a penal institute, and everything in between. One that was stupidly enticing (and sold out) was a 15 EUR model of a tiny bigfoot, where the object of the game was to hide it and take a blurry photo, for your friends to try and subsequently locate. I probably spent the vast majority of my time looking at these games just because how diverse they were. I did, at times feel quite sorry for the people in the booths that were not getting as much attention, but hopefully they got a good amount of feedback to improve on the next one.

Outside the convention, Essen is a nice cosy city. We visited the town for the light festival one night, which was a lot better than I imagined. When we got back at our accommodation, we spent most evenings drinking, chatting and playing the various fun and easy games that we picked up (including a drinking themed game about pigs getting drunk, while we did the same). It was nice to catch up with everyone and find out what they all enjoyed. Usually highlights of one person’s day ended up being recommendations for the others’ next day. I didn’t see as many of the group while at the convention except in passing or to meet up for a bite. As fun as it is to go around in a group, it was also nice to spend some time walking around at your own pace, taking your own time at random booths, and jumping into games with strangers who were one person short. Next year I’ll try to be more sociable.

I’ve probably missed out on heaps of things, like the apps and maps, the (attempts to stick to) budgets, and of course, the many many other games that probably deserve a mention, but I’ll leave it at this for now.

Reflecting back on the little trip, I think it’s good for anyone who’s interested in the hobby to check it out if they’re in the area, or have a group going. It’s a great way to meet new people, hang out with your existing group, or improve your friendship with your acquaintances. I’ll definitely go next year if I’m around, and until then, I hope I can see some of the Wageningen cohort either if I visit, or hopefully if they stop in town.

P.S. It’s a small world after all

I’ll add one random story. I was on the metro holding my (New Zealand) shopping bag of games, making small talk with a German man who was also heading to the convention. After some game talk, he asks “is that a New Zealand supermarket bag?”. Turns out he is married to a Kiwi who lived one neighbourhood over from me (I didn’t know her). Furthermore, we talked about games having some utilitarian value for things like education and training. I mentioned a teacher friend of mine who used a self-created version of a game called Dobble (a simple game, but very tricky to get your mind around how it works) to teach biology to his students. Turns out that the German man had not only done something similar, but his thesis at university was the mathematics of creating a game like Dobble! That was quite a double coincidence!

One thought on “My First Essen Spiel”